The mosque is the most famous mosque in the city of Hurghada The mosque was founded in 2006 and was opened in 2012, it was built about eight thousand meters and was commissioned to build nearly 20 million Egyptian pounds, this mosque overlooking the sea directly took building The mosque is nearly five years ..

This mosque is built to accommodate more than ten thousand worshipers. The building consists of two high-rise minarets and there is a large hall for events, religious celebrations and lectures.

Next to the two minarets, we will find 25 different size dome to give the mosque a unique and distinctive shape that is characterized by the Mosque of the port from the rest of the mosques inside the city. 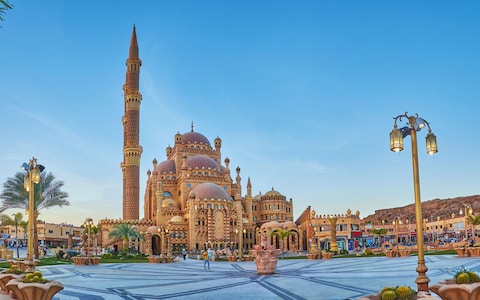 The Harbor Mosque in Hurghada is an architectural masterpiece that will surprise you every corner inside. It is built in a unique architectural style that combines the Andalusian style with the Arabic style. It also features drawings and inscriptions on walls, windows and ceilings.

The bishop hangs out a number of huge chandeliers and lamps weighing about one and a half tons, and is considered a rare and different piece of art, and above this bishop we will find the names of the Prophet and the Companions written in kufic script which is not read by all of the tangle of letters. Witch is catching the eye.

The Harbor Mosque in Hurghada is also one of the three largest mosques in the Middle East. It is considered a tourist shrine in non-prayer times and many tourist companies organize private trips to visit the mosque.

The mosque contains a center for the Islamic call, which receives a lot of visitors and tourists to learn the lectures and seminars that know them about the religious teachings and the tolerance of Islam and that through a number of al-Azhar scholars who are fluent in several different languages ​​to reach all nationalities, 90 tourists in this mosque of different nationalities and that after Friday prayers.

When foreigners visit the port mosque they wear gowns before they enter, and the visit takes place on dates other than prayer times. They feel safe and happy when entering the mosque.

In the hall there is a mobile library with katabibat, which is free for tourists in different languages, suitable for all nationalities that visit the mosque. There are also three screens and a reception hall in the hall.

Recently, renovations have been made in the lighting of this mosque and a stand for the latest lighting systems, so this mosque was considered an architectural masterpiece that captures the eyes of every visitor and tourist

Address of the port mosque in Hurghada:

How to buy a surfboard from the surf shop?

Comments Off on How to buy a surfboard from the surf shop?

Why are more people choosing a Glamping Holiday?

Comments Off on Why are more people choosing a Glamping Holiday?

Self Catering vs All-Inclusive: The holiday dilemma

Comments Off on Self Catering vs All-Inclusive: The holiday dilemma

Comments Off on Indian Trains: A Traveller’s Survival Guide

5 Scrumptious Pizzas That You Must Try

Comments Off on 5 Scrumptious Pizzas That You Must Try